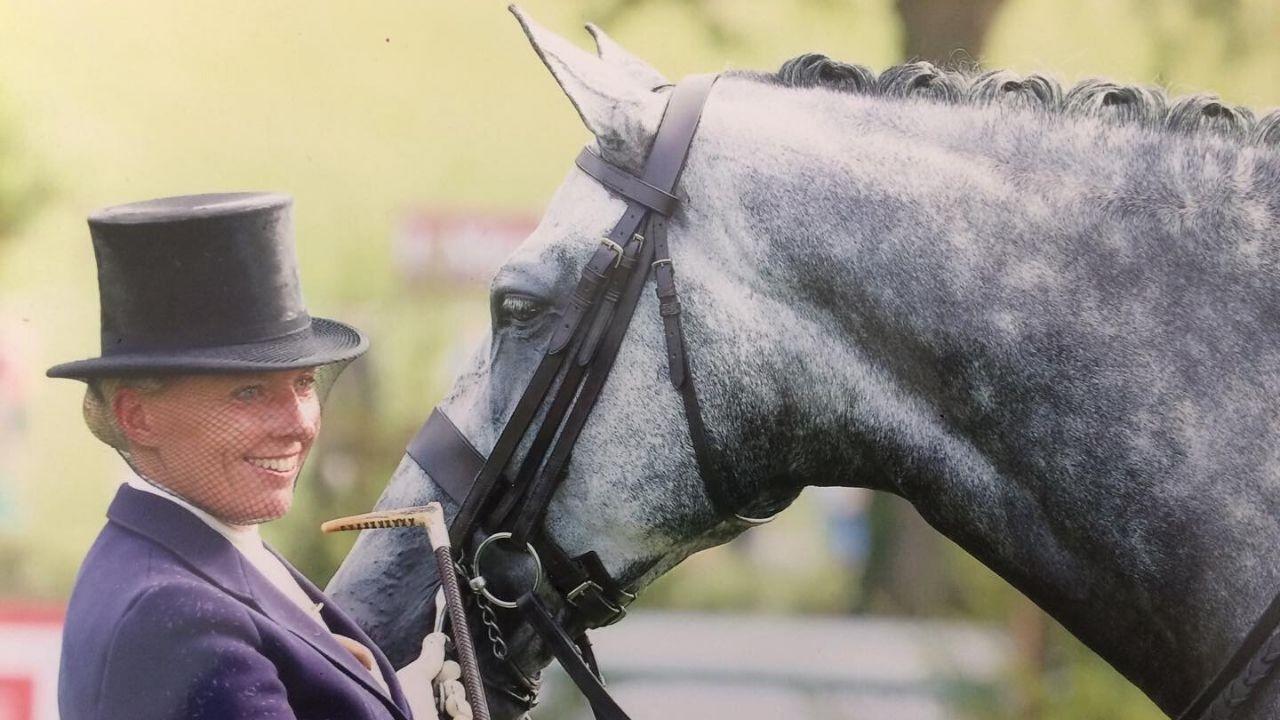 In the equestrian world, Penny is best known for her successes in the sphere of side-saddle and top level showing. However, over the years, she has competed in virtually all equestrian disciplines

'I started riding at a very young age having pleaded with my parents to let me go to the riding school that our garden backed onto and from the outset I was hooked!' Penny explains. 'In the early days, I used to go for a weekly lesson at the riding school, which quickly became the highlight of my week.'

As her riding progressed and it became clear to her parents that it was not a passing hobby. Penny was lucky enough to have a series of ponies in the remainder of her childhood, all of whom she loved with a passion and learned to do everything with them. 'I would take part in all Pony Club and Riding Club activities and generally having a huge amount of fun with the ponies. I moved on to affiliated show jumping with my last pony, on whom I had some notable wins. It was this last pony, Celtic Mystique (George) that I got my first taste of showing from, as we started doing BSPS Working Hunter classes with success, and also Ridden Mountain and Moorland classes alongside his show jumping.' she tells us. 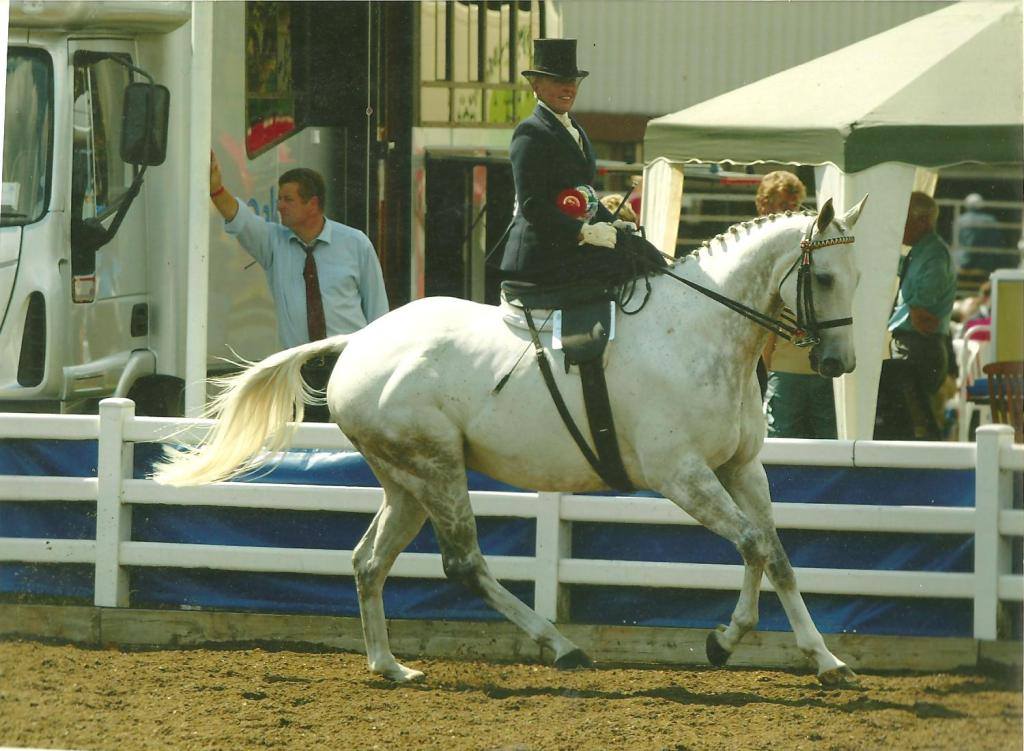 On moving onto horses at the age of 18, Penny decided that she wanted to do more showing and also to take up the art of riding side- saddle, something she wanted to have a go at throughout her childhood but hadn’t had the chance to do so, so yet again, she took herself off to a local riding school for some side saddle lessons to try to perfect the art of riding side saddle.

In the years that have followed, she has owned some lovely horses and enjoyed a lot of success with them in side saddle classes and showing classes, including many wins at National level and around the county show circuit.

'For many years, my horses had to fit in around working full time in the banking industry and I became quite an expert at fitting in stable duties, riding and teaching around a demanding job.' Penny like many equestrians juggled horse and career before focussing on horses full-time. Having taken her BHSAI and BHS ISM exams and Side Saddle Instructors’ exams, she made the decision to make horses more of a career and for a number of years, ran her own Equestrian Centre, though more recently, has branched out into the world of freelance teaching/ coaching and riding, which she tells us 'I enjoy enormously as it’s very rewarding to see my pupils gaining in confidence and seeing some of them having wins at major shows themselves'.

Also a panel judge for Sports Horse Breeding GB (SHBGB), Ponies UK (PUK), The Side Saddle Association (SSA) and The Showing Register (TSR). Penny has had the honour of judging at many high profile shows in the UK and Ireland . 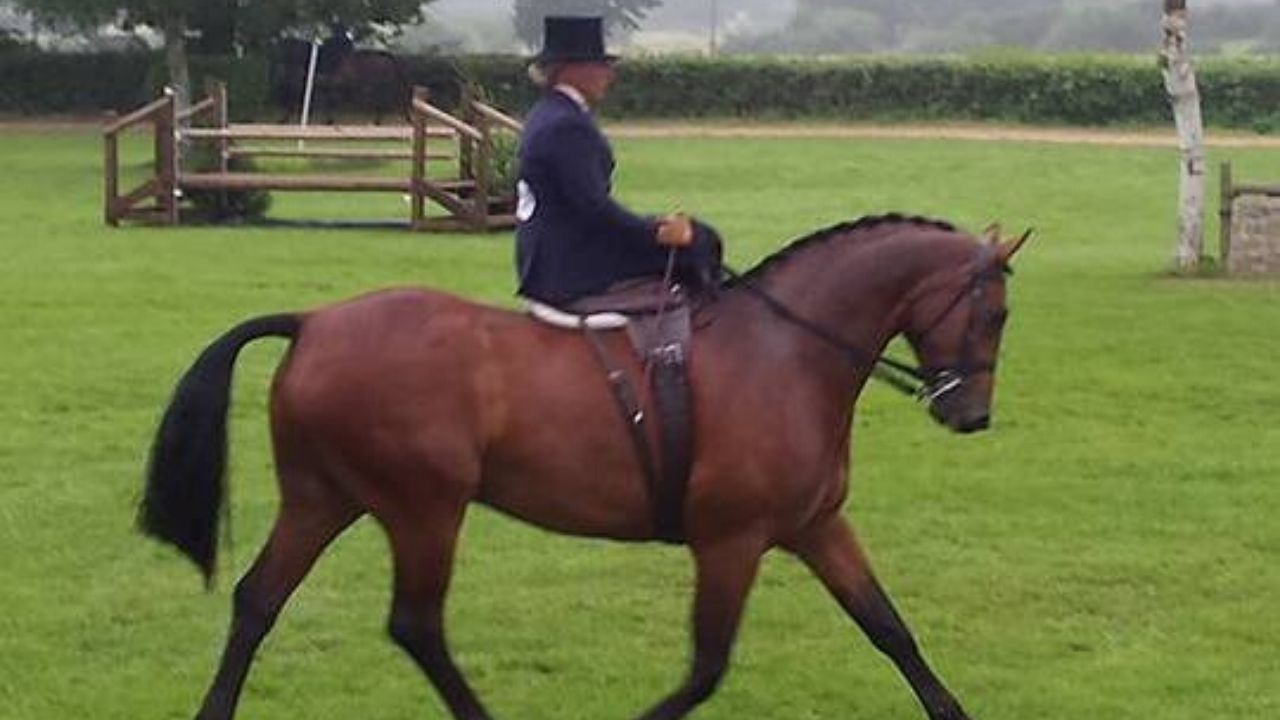 2018 proved to be a year of mixed emotions as the year didn’t start off well as her beautiful Middleweight and Ladies Show Horse, Billy, had an injury and had to have box rest and then be turned away. Then the opportunity came up to purchase a stunning horse that Penny tell us 'I’d fallen in love with at first sight, I couldn’t have been more thrilled when one of my pupils who is also a wonderful friend, Louisa Harvey, stepped in to help me buy Caledonia or Blue as he’s known at home.' 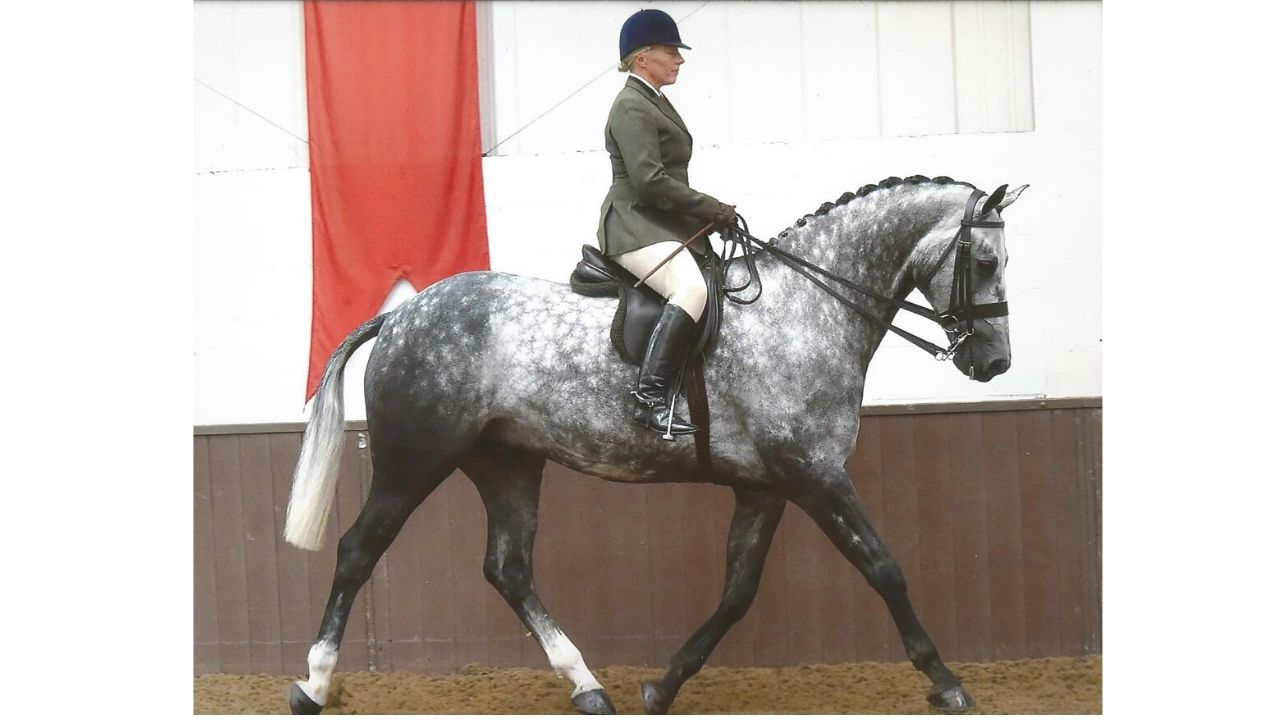 Blue hadn’t been shown before May last year, having started his competitive career as a showjumper, but he’d been successfully competed at a few shows as a Novice Show Hunter with producer, Ian Smeeth, before coming to Penny. 'As soon as I’d seen Blue, I’d thought he would make a top class Ladies Show Horse as he is extremely elegant, with the “look at me” quality needed in a top show animal, but he hadn’t carried a side-saddle before. Most horses do take to being ridden side-saddle very well and Blue proved to be no exception.' she explains.

Within a few weeks of having him, I took him to the local Side Saddle Association Area Show where he won his class and qualified for the British Show Horse National Championships in September. 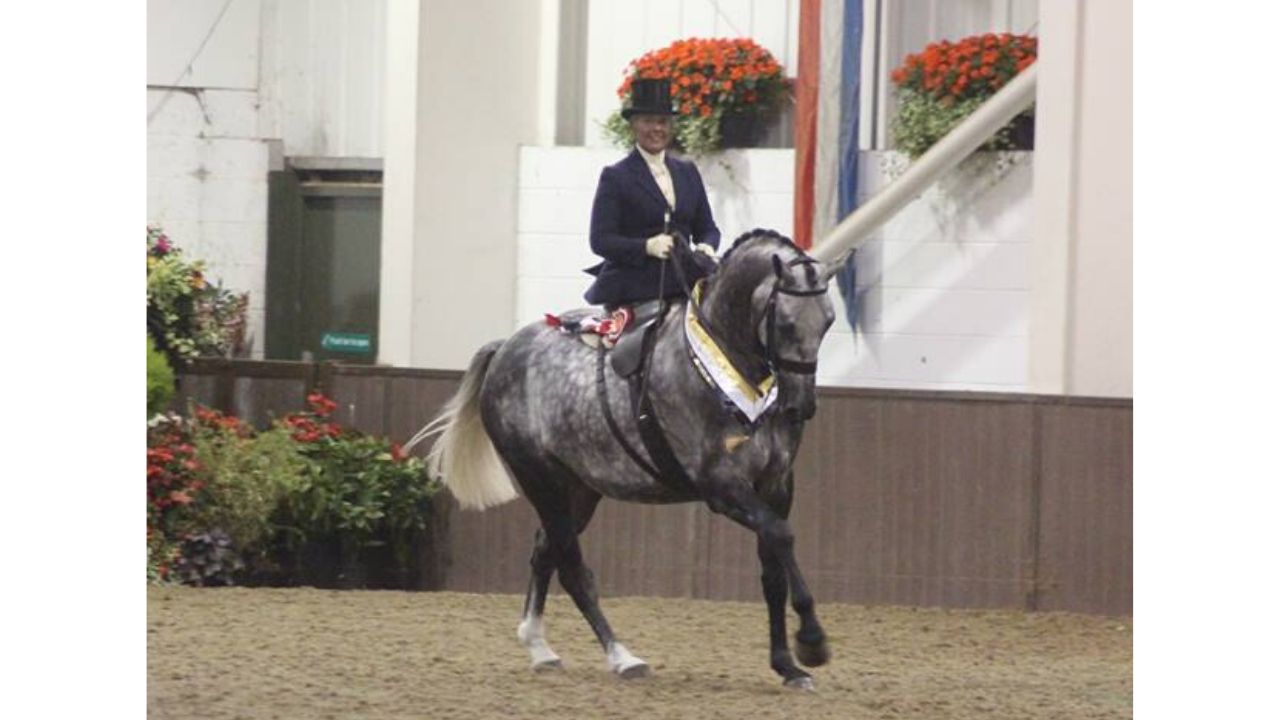 Penny and Blue in action at the BSHA show
'I took him to this Championship and was absolutely delighted with Blue when he was crowned Supreme National Champion Ladies Show Horse. We then finished off the 2018 show season with a win in the Royal International Ladies Hunter Qualifier and section Championship at The Royal Berkshire Show, which means he’s qualified for this final at the 2019 Royal International Horse Show.' Penny tells us about her successful show season.

So, 2019, looks as though it should be an exciting year for Blue and Penny. Their key goal is to qualify for the Horse of the Year Show, hopefully in both the Ladies Show Horse Final and the Lightweight Show Hunter class and we look forward to them sharing their journey along the way. Penny tells us, 'I have the ride also on a 4yo Show Hunter, who will do a few novice and 4yo classes as well as having the ride on several pupils’ horses in the course of the year.' With various pupils also already qualified to compete at the Royal International Horse Show and hoping to gain Horse of the Year Show qualification, 2019 looks as though it will be a busy year!

Penny talks about her Horse of the Year Show experiences on the Rider Success Podcast where she shares her HOYS results! 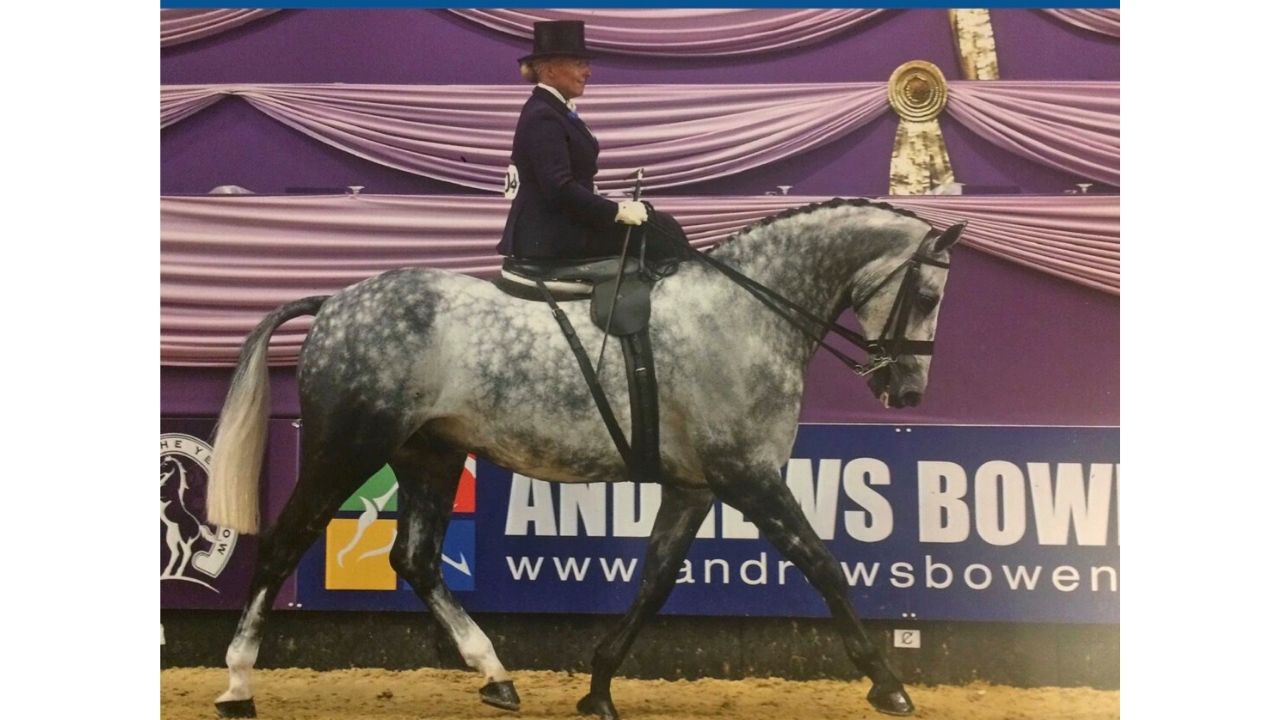 You can follow Penny Clarke - Side Saddle Judge and Trainer on:

Stay connected with news and updates! 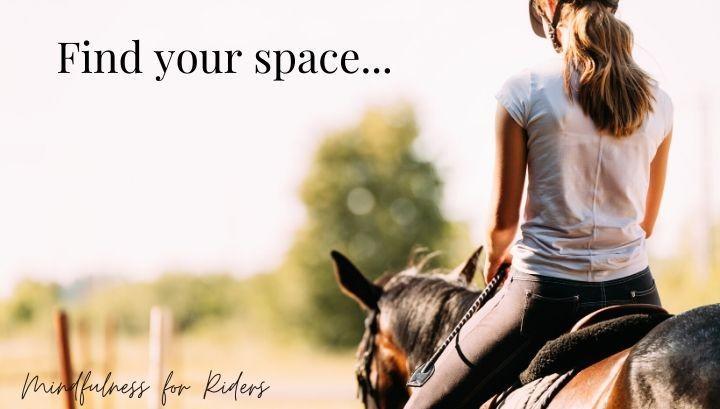 Introduction to Mindfulness for Riders FREE session is now available...

Join us in the training room for an insight into mindfulness and  psychology for riders. 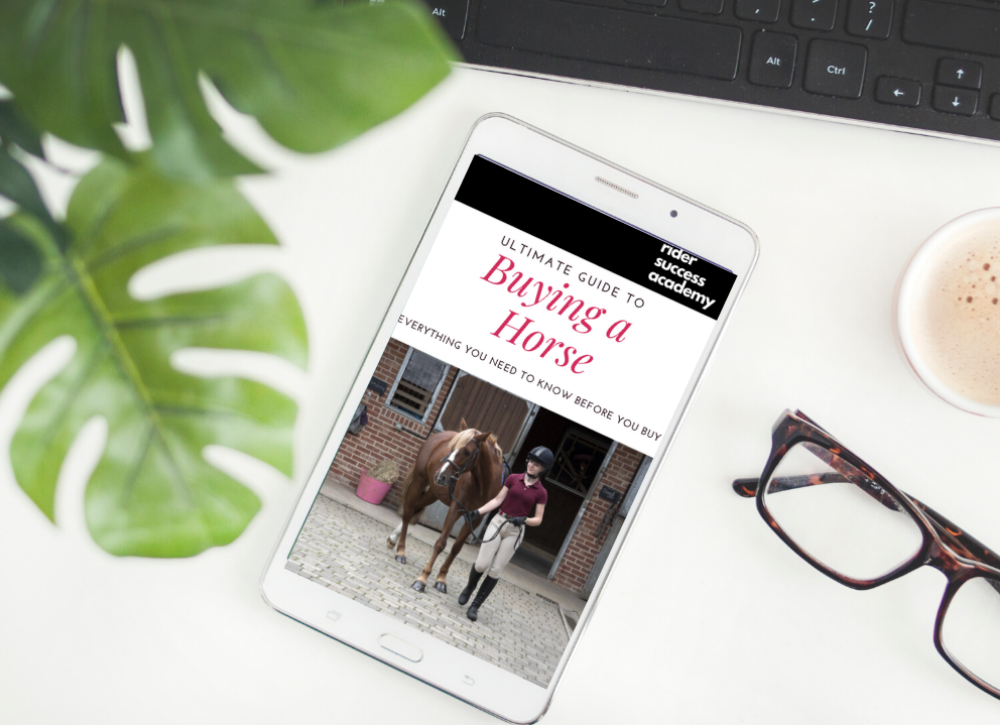 Download your FREE Ultimate Guide to Buying a Horse Ebook

Plus! Bonus checklist to take with you when viewing your potential new horse! 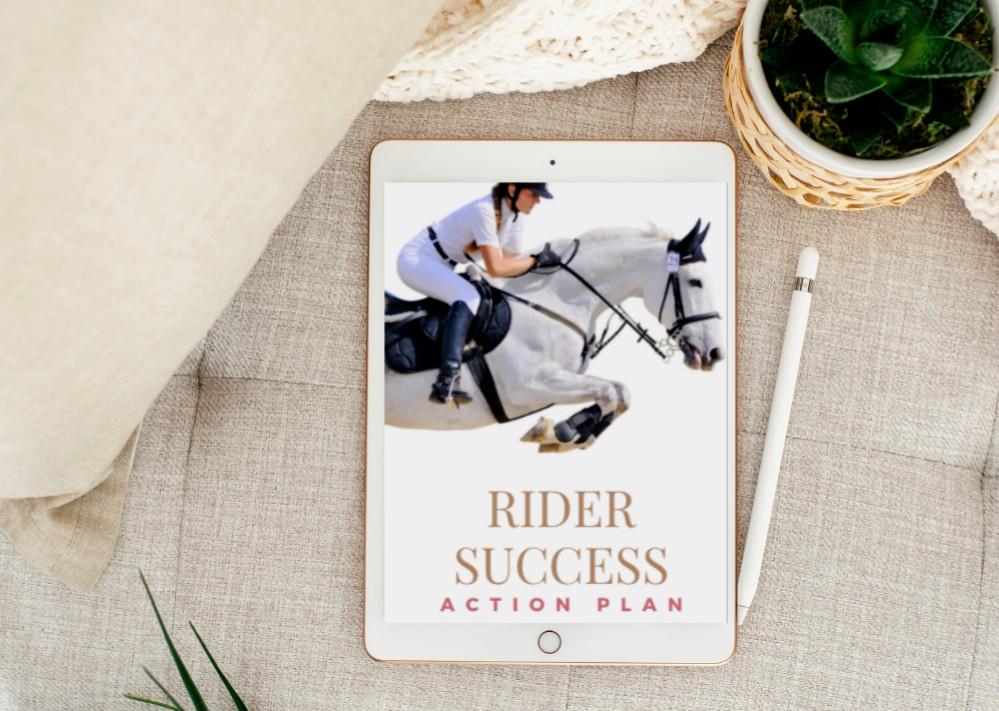 Get it now!
Close 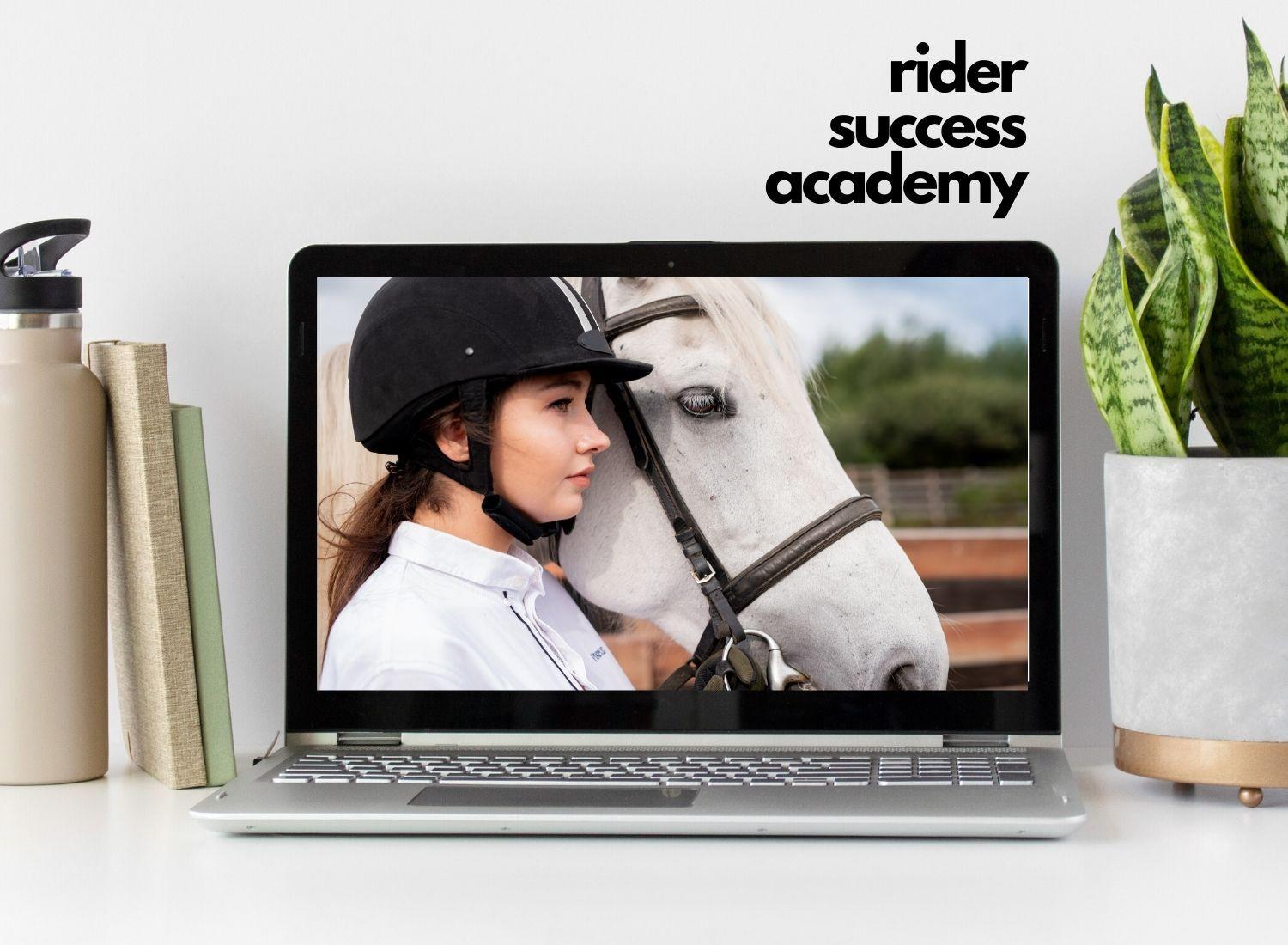 Join our newsletter and get a 10% discount

I am really looking forward to sharing with you our exciting news and updates including new podcast episodes, blog articles and exclusive insider info, you'll find it all in our Rider Success Newsletter.